OS X 10.10 Yosemite came in as one of the bigger upgrades in the OS X history. Revamping the recognizable interface, changing the way user interact with their Macs and introducing new features that were too many to count. Anything from the new OS X and iOS devices connections to pivotal Spotlight changes and everything in between, Yosemite was elegantly new, yet remarkably familiar. The upgrade became an immediate no-brainer upon its release in June, 2014. The latest and greatest OS X from Apple was not without its share of problem though. If you own a Macintosh computer that runs under OS X Yosemite, read on for optimization tips that will help fix a slow Mac or prevent a performance decay.

Why is Mac Running Slow After Yosemite Update?

As it’s already been mentioned above, OS X 10.10 update has brought in numerous changes. When so much is carried out in a single update — chances are not everything is going to work as intended. Unfortunately, OS X Yosemite is not an exception to the rule as not all of Apple computers have benefit from the initial release. If fact, users have reported that their Macs were running slow after updating to Yosemite. Here are some of the most common OS X 10.10 issues and how to fix them.

Some users who had FireVault enabled, ran into the issue of it being stuck on “Encryption paused” after upgrading to OS X Yosemite. To see if this is the reason your updated system is acting up, go to System Preferences > Security & Privacy and check up on what’s going on in the FireVault tab. If you see “Encryption paused” message requesting you connect power adapter to resume encryption, and you’re already connected, then you know you’re dealing with an issue. To fix the problem follow these steps:

This should help unstuck FireVault encryption and help restart the process.

Login items are among the first things to check if your Mac is slow at startup. Not much to say here, as all the processes included in the list are being launched by the operating system at startup. Open System Preferences > Users & Groups select your user and switch Login Items tab. Select an application from the list and click on the minus ( - ) below to exclude it from the list. You will want to prioritize applications like Google Chrome that are especially resource-hungry. 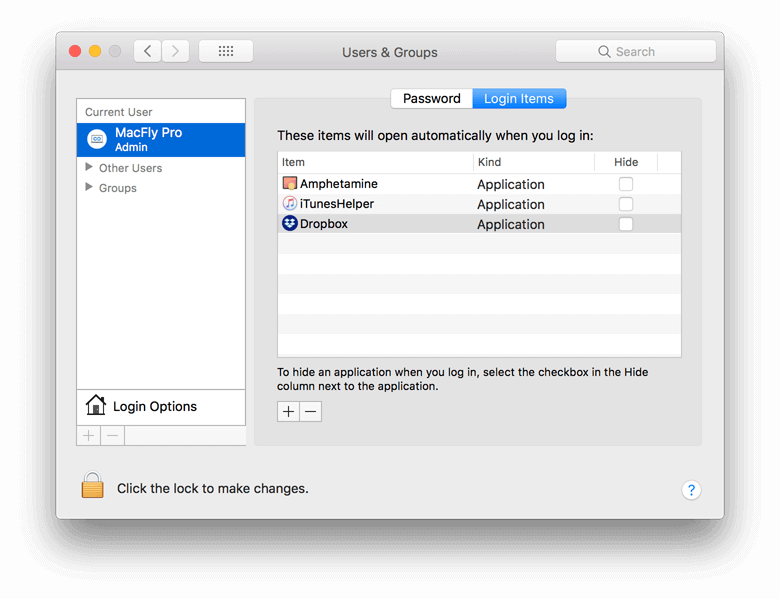 How to Clean Mac Yosemite and Speed it Up

Besides the things already mentioned above, you can still pull off a few tricks to speed up your Mac under OS X Yosemite even further. To ensure a stable performance, your startup disk should be kept cleaner at all times. This can be done both manually or using specialized software.

You can find an app for anything — locating duplicates, erasing temporary data, cleaning out leftover files, etc. If you feel like you’re having trouble in a particular area such as consistently building up duplicates, then looking up a tool to aid you in dealing with the issue quicker is the way to go. There is also an option of getting quality software that covers all major aspects of OS X maintenance. In such case, MacFly Pro should be on your radar. It’s a powerful multi-tool that is Yosemite compatible and offers functionality that is hard to beat.

With the upgrade from Mavericks to Yosemite, OS X had undergone a visual overhaul. The new refreshed design has its appeal, yet puts a strain on your performance. Fortunately, you can tone down the visual candy and make it easier on your system.

Granted, this will not supercharge your Mac’s speed, but it will quicken animations and improve the overall feel of performing actions.

On a final note, Apple has taken a step in the right direction with OS X 10.10 Yosemite. Minor bugs that cause inconveniences are bound to be fixed in the future release. Therefore, besides taking good care and keeping your system clear, make sure to have the latest updates installed.