What Is Causing the Slow Boot Up MacBook Pro

The thing that makes MacBooks so great is that they are well-built, reliable and, of course, snappy. Apple does a fantastic job at optimizing both software and hardware to make computers ready as soon as you need them. It is underwhelming, to say the least, when turning on your MacBook gives you enough time to get off your chair, make coffee, drink it and come back only to realize things are booting up still. Clearly, this is a bit of an exaggeration, but you get where this is going — it feels like eternity. So what can be the source of the problem?

Login Items are applications and services that your Mac automatically runs when you start your computer. Login Items include apps like iTunes, Spotify, antivirus software, various update services etc. You can actually have quite a few (depending on how many apps you have installed) running without realizing it. The more Startup Items you have on — the slower the boot up.

Even though littered desktop may not bother you, but it sure can bother your Mac. Having plenty of files, especially images and documents, on your Desktop can be slowing down your Mac’s work in general as well as its boot up speed. Such files have previews being generated for them by macOS which, basically, preloads each of the files and can make your Mac feel sluggish.

It is hardly ever a good idea to stray away from the newer version of the operating system. You may not be into the minor redesigns here and there, but if you dig deeper, updates bring to the table important security patches, bug fixes, and overall stability improvements. If you have an old version of OS X installed, it may be the reason why your MacBook feels slow at boot ups.

Owning an older Apple machine can simply mean that your hardware is wearing out. The main reason (in terms of hardware) for slow loading times as well as boot up is usually the hard disk drive. Over the past couple years, the write/read speeds of drives have made a giant leap and left old mechanical HDDs way behind.

How to Make Mac Boot Up Faster

The list of reasons that are causing your Mac to run slower is fairly extensive. Having named a few major ones, let’s dive into what you can do not only to make your computer run faster, but also keep it from a majority of these problems in the first place.

Booting Up Mac in Safe Mode

Booting in Safe Mode is extremely easy to do and can potentially solve the slowness issue (or point you towards the solution). It gives you an actual representation of how snappy your computer might feel. Safe booting your Mac does the following:

To boot in Safe Mode, you will have to either Restart or simply Start your Mac and immediately hit and hold the Shift key. Let go of the Shift key when the login window appears.

Make sure to pay attention to how fast your computer starts in comparison with regular boot up time. Upon logging in to the Safe mode, restart your computer again and go back to Normal mode (don’t hold any buttons when starting up the Mac). If your computer boots faster - then the problem was in excessive or corrupted caches, if this doesn’t improve the boot up speed - then you should check up on how many Login Items do you have.

Depending on how often you install new applications on your Mac it is a good idea to occasionally revisit your user settings and check for processes running upon Login. If you have never made changes to the Login Items in your user settings, then it’s highly advised you go do it right now to, at least, familiarize yourself with what is happening to your Mac when it boots up. Go to Apple Menu > System Preferences > Users & Groups. From there, click on your Username and choose Login Items next to Password. You can add or exclude applications from starting up upon Login by using + and - buttons below the list. Removing the apps you don’t use on startup from the list can help increase the speed of your Mac’s boot up time. 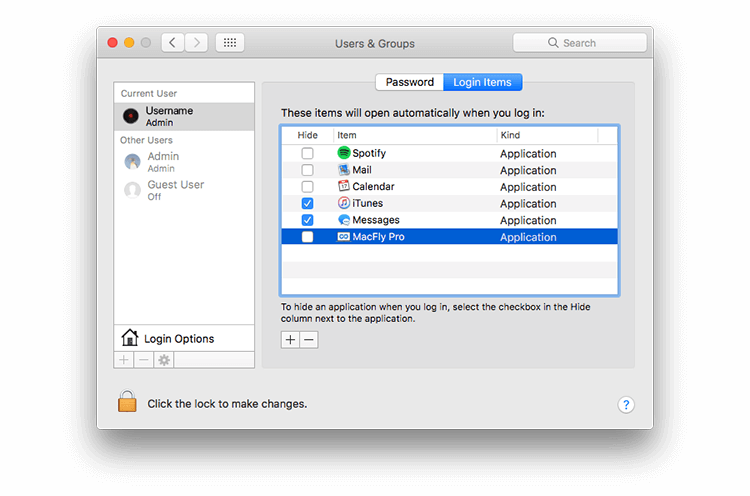 Organizing Files on the Desktop

After realizing that you have unintentionally (or intentionally) filled your desktop with files to the point where it affects your Mac’s performance, dealing with it is all you left to do. There are 2 approaches to doing it.

Number one - sit down and actually take the time to look into each of the files and either sort it away or delete altogether.

Number two is the lazier and quicker way of dealing with the issue. Create a new folder, cmd+A to select all files and drag them to the folder. Problem solved (at least for now).

Alternatively, you can Disable Finder Icon Previews by going to Finder > hitting cmd+J > ticking off Show Icon Previews. This will prevent Icon Previews from loading and should too have a positive effect on your Mac.

It may be a prime time to consider an upgrade, if you are using an older Mac that came with a Hard Disk as main startup drive. Upgrading to an SSD is arguably the biggest upgrade you can make for your Mac to feel like a brand new machine. While good SSDs don’t come cheap, they are well worth the money if you don’t plan on cashing out for a brand new computer anytime soon.