What Is CCleaner and Is It Any Good? — CCleaner Review

CCleaner is a utility cleaning program that was created by Piriform. It was designed to deal with various issues related to unwanted files and was initially released for Windows OS back in 2003 and on macOS in 2011. Fun fact for those of you curious what the ‘C’ stands for, the ‘C’ came from the former name of the application — Crap Cleaner, it is safe to say the name change was for the better.

Jokes aside, Piriform’s CCleaner has held a decent reputation among Windows users over the years, however the question that matters today — is CCleaner any good on macOS?

Unlike most utility applications these days — CleanMyMac, MacFly Pro, MacKeeper — you are not getting a package deal with CCleaner. Pitiform’s utility app mainly focuses on dealing with issues caused by temporary files like corrupted cache, permission errors, etc.

CCleaner puts an emphasis on the Cleaner feature (who would have thought, huh?) which is capable of cleaning caches, logs, cookies, history, and other unneeded files on your Mac. Not only that it deals with all that on macOS’s built-in apps, but also features cleaning of the apps installed on your Mac.

Using the Cleaner feature seems fairly simple and intuitive. You get to manually select what kind of junk you want to remove and which apps to scan. However, once CCleaner is done scanning, there is no way to deselect files from the scan results before cleaning. That feels odd, to say the least. The workaround is to ‘uncheck’ the fields in the column on the left, run another scan, and only then clean. Basically, you will have to take a few steps back if you want to prevent CCleaner from removing some files found during the latest scan. 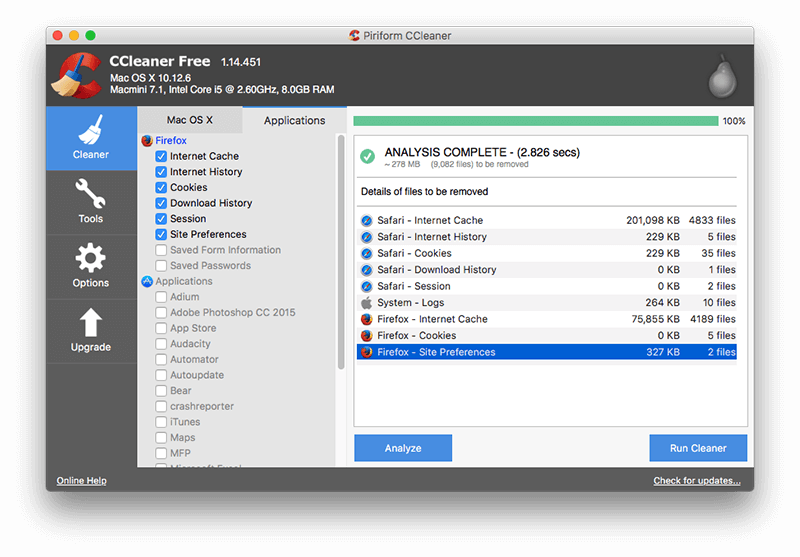 Important note: It is also worth mentioning, that upon running a full cleanup with all of the fields checked, there was noticeable increase in performance on the Late 2014 Mac Mini used for the test.

The Tools tab is definitely feels like a supplementary feature which does not seem to bring any new functionality to your Mac cleaning. It is still nice to have though.

Using Tools you can uninstall apps, manage services that start when your Mac boots up, and erase free space (if your Mac uses HDD). Similar features are already built-in to OS X, and CCleaner’s Tools is only a matter of convenience having it in the tab at hand. Yet, these Tools come to use on rare occasions only. 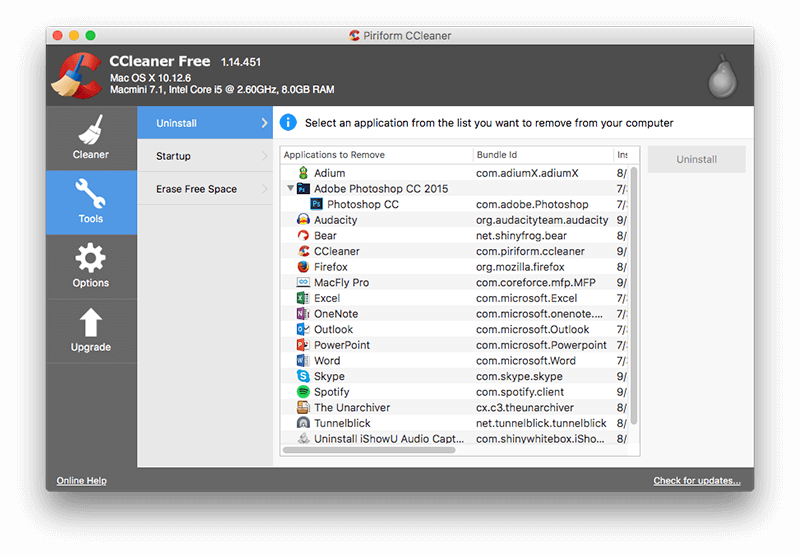 If you are interested in Piriform’s CCleaner Mac — download it for free from their website. It’s not entirely an equivalent to leading cleaning software, but it can be a decent alternative if you know what you’re getting into. At the price of $30 you can upgrade to Pro which will unlock ‘Professional’ features that offer automatic cleaning, updating, and support priority. So if automation is your thing, then 30 bucks is the price to pay. Not much to say here. 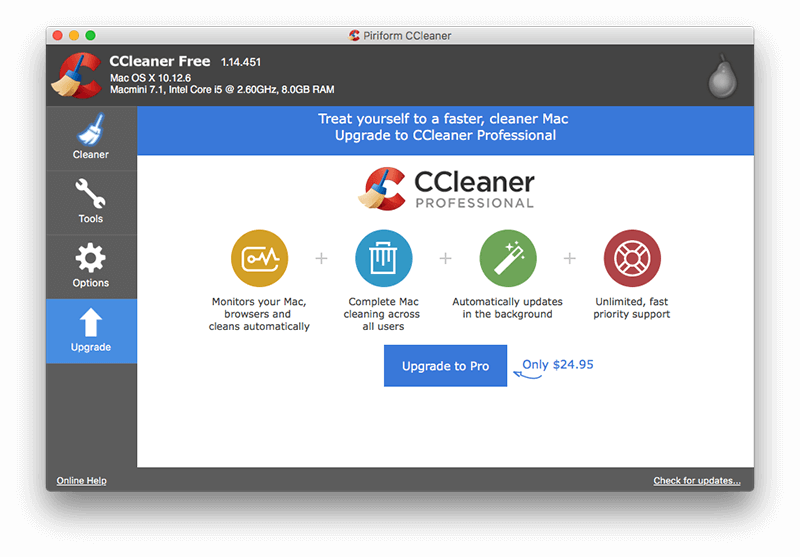 Is CCleaner Safe to Use?

Even though Piriform’s free app has managed to maintain a good reputation, unlike some of its competitors (looking at you MacKeeper), it is still wise to question its safety.

In the CCleaner’s case, most concern is raised by Windows users, who were the ones to experience issues with Piriform’s registry cleaner feature. Some share that it’s the registry cleaner that makes their system a mess, which is not surprising, as any malfunction in the automated cleanup tool can potentially lead to removal of essential OS files. Luckily, this is not the case for Mac.

The important thing to know is the fact, that there is always a small risk of the tool removing something that it shouldn’t have, or missing a different file that should’ve been erased — automation is not perfect.

How to Uninstall CCleaner from Your Mac

Granted, CCleaner may not be your cup of tea. If you are looking to remove CCleaner entirely from your Mac — seek no more, here is how to do it. Fortunately, the installer doesn’t infect your Mac with any viruses or malware, and uninstalling Piriform’s cleaning tool is pretty simple. Just follow these steps:

CCleaner is simple and free to use, it also features a familiar interface for users coming from Windows. On the flip side, it has neither proven to improve the speed of your Mac, nor bring in a set of strong features. So who is Piriform’s CCleaner for? It’s a great free app that let’s you clean cache and uninstall apps from a single interface, however if you are looking for something more advanced capable of improving your Mac’s performance, then CCleaner is not the app to settle for.