Is MacKeeper Good for Your Mac? — Features Roundup & How to Uninstall Tips

Before jumping into its features, let’s figure out what MacKeeper is. MacKeeper is paid utility kit for Mac that claims to combine 17 performance tune-up apps in 1. That definitely sounds good on paper, however there is so much controversy around MacKeeper online that you can’t help but doubt the usefulness of what the kit it has to offer.

If that controversy hasn’t scared you off by now and you are willing to give MacKeeper a benefit of the doubt, then this is the review you need. Let’s get into it and see if MacKeeper is worth the money. 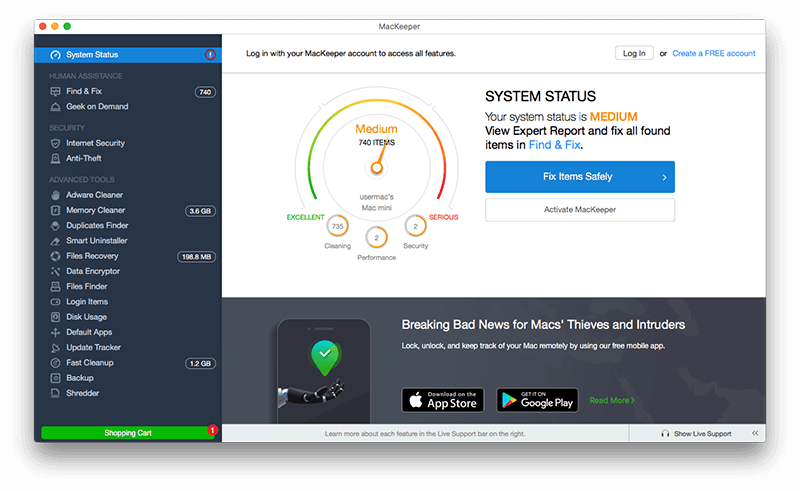 How Does MacKeeper Work?

MacKeeper has a rich selection of features that you can access by committing to a whopping €15 a month (or €5 a month if you cash out for €120 bill and prepay 24-months at once). Right away, it’s a tough sell and it’s not surprising that at this point you are asking yourself — ‘Do I need this at €15 a month?’.

According to MacKeeper you’re getting 17 essential (they only come bundled after all) apps to keep your Mac clean, but do you actually want all of these? 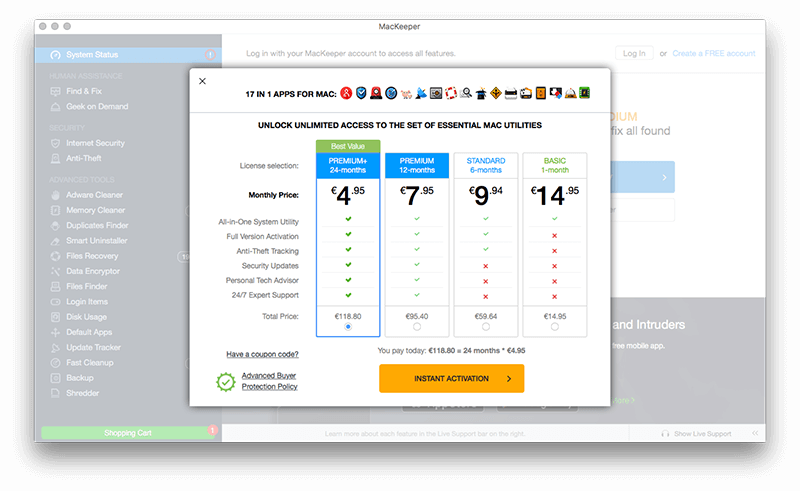 Let’s take a look at Data Encryptor, Files Finder, Login Items, Disk Usage, Default Apps, Update Tracker, Backup, Anti-Theft tools for example.There is one huge downside to all 8 of them — these apps are alternatives to macOS built-in utilities offered by Apple for free (some are just reskinned settings available in System Preferences). Features provided by Apple require no additional installation or configuration, and it’s not like they don’t do their job well enough.

If you were to count 8 of these out from MacKeeper’s unique package of tools, then it only leaves 9 out of 17 apps to consider.

On the up side, if you are using all of these features on the daily (which unfortunately most users don’t), it may be useful for you to have access to all of them from within the same app. Is it worth €15 a month? — well, it is for you to decide.

Utilities with Little to No Benefits

Next up are the tools that show promise, but don’t prove to have much use on the daily — Internet Security, Adware Cleaner, Memory Cleaner, and Geek on Demand.

If these features are of little importance to you, which they probably are, then you are left with 5 out of 17 features only.

Finally, here are the core apps that come in the package:

Considering the functionality of these features, it is unlikely that you will need to run these often, but at least they do what they promise for the most part.

Is MacKeeper Safe for Your Mac?

When researching ZeoBit’s MacKeeper online you will quickly run into articles and forum posts that call it malicious and not safe to use. Even real users on Apple forums testify against it, calling MacKeeper a ‘highly invasive malware’. The product is free to download, and when installed, it plants its roots so deep in the OS that it takes a dedicated step-by-step guide to remove all files and folders scattered around your Mac. ZeoBit has also been called out by legit sources for neglecting marketing ethics and committing to sneaky ‘pop-under’ web ads and other shady tactics to get users to install their app. They explained, that those were overzealous affiliate marketers who opted for such strategy. Affiliate marketers or not, you can’t help but wonder who came up with the questionable idea of having a bot send you up to 10 messages after you have scanned your Mac. 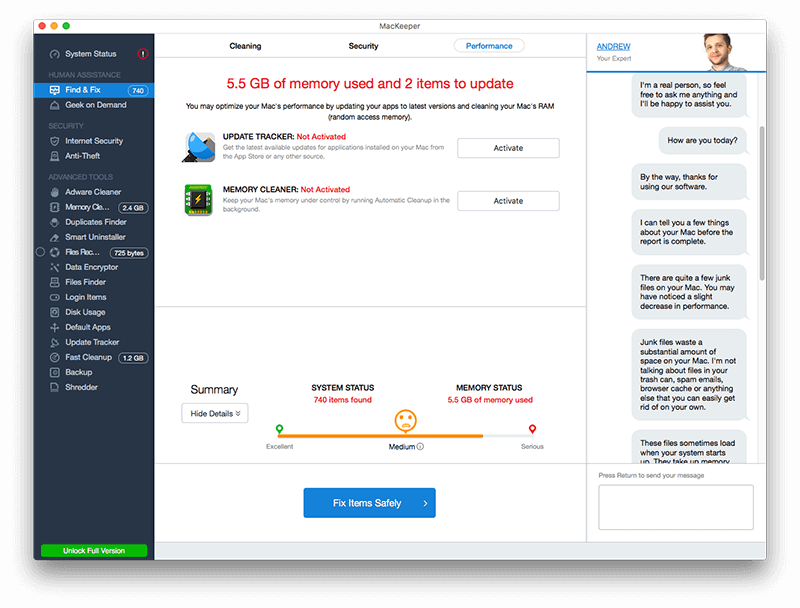 Regardless, the fact is that MacKeeper is extremely hard to remove and runs intrusive programs like MacKeeper Helper on your Mac doesn’t create a good impression of a ‘tune-up’ software. Some users have also claimed to experience performance issues after installing MacKeeper.

How to Uninstall MacKeeper?

Unfortunately, you can’t uninstall MacKeeper simply by dragging it to Trash like most other apps on Mac. Even before attempting to completely delete MacKeeper from your Mac you will have to do the following:

Once all the preparations are done, here is how to get rid of MacKeeper.

Quit MacKeeper, if you have it running, and delete the app itself by going to Finder > Applications > MacKeeper. Click and drag it to Trash. Next, open Finder> hit Go in Menu Bar > Go to Folder … and start going through the following directories and removing every file and folder that has MacKeeper name in it: 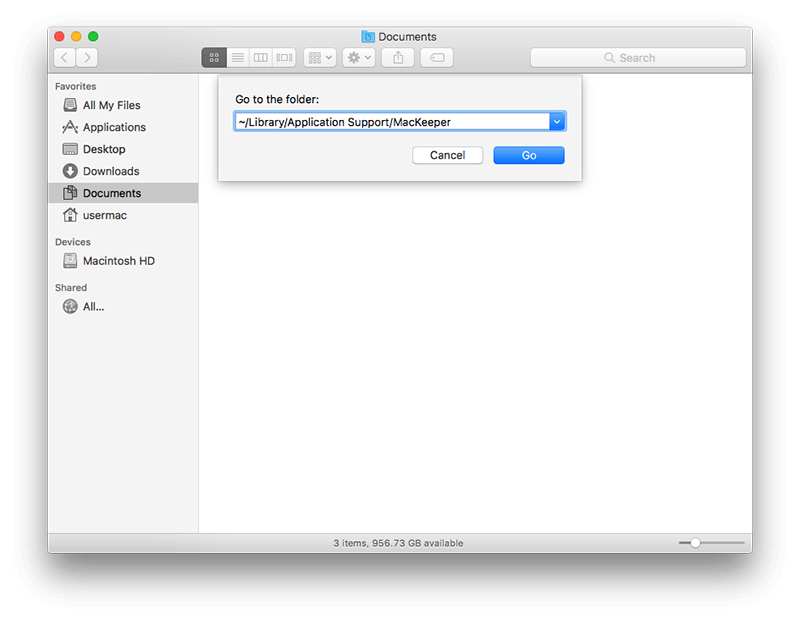 After completing the process head to Applications > Utilities > Keychain Access and make sure nothing with MacKeeper is listed. If you find anything saved — delete it too.

You will also need to check Login Items in System Preferences > Users & Groups > Login Items menu. If MacKeeper is still on the list, hit ‘—‘ to remove it.

To complete the process, head over to Trash and click Empty Trash. It is advised you restart your Mac afterwards.

Note: If you still get MacKeeper pop-ups, then clear your browser caches.

MacKeeper may no longer be as malicious as it used to, however it is still frustrating to deal with. Only a few of the features offered within the app have practical use, which at this price point, is not enough to contest with most competitors. All in all, your Mac (and your wallet) are better off without MacKeeper.